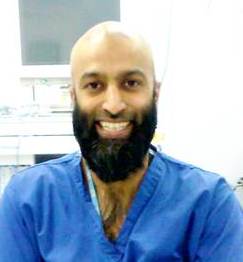 Ziali Sivardeen is an Orthopaedic Specialist who has treated many high level athletes and sports professionals, with Shoulder, Elbow or Knee problems.

During the London 2012 Olympics, Mr Sivardeen worked at the state of the art athlete’s village and had the honour of being the Surgeon who operated on all Olympians and ParaOlympians that required Shoulder or Elbow Surgery during the Games. Due to his role, Mr Sivardeen was invited to a special reception at the Queens Gallery in Buckingham Palace.

He has seen  and helped manage many athletes with Knee Problems, including those linked to Premiership Football Clubs, and has treated many sports people with ACL injuries, cartilage and meniscal tears.

Mr Sivardeen  has held  important positions training other surgeons, representing the prestigious Royal Colleges Of Surgeons, first as  a Tutor from 2010-2014, before being appointed as one of  two  Regional Surgical Advisors for London. In 2015, he organised the  pan London Sports and Exercise Medicine teaching programme, and now is an Examiner for the Prestigious Intercollegiate Fellowship of the Royal Colleges of  Surgeons (FRCS exams).   He has been a member of the Specialist Training Committtee for Sports and Exercise Medicine Trainees in London from 2009 to 2015, so played an important part helping to develop this new speciality.

On the NHS, he worked as the Surgical Lead or Joint Service Lead of the Sports Injury Service at Homerton University Hospital from 2009 to 2015.

His research interests include orthopaedic  shoulder and knee problems, including sports injuries in elite rugby  players. He had in excess of 70  presentations accepted at prestigious national and international meetings by 2012.  At the main World Shoulder and Elbow Meeting in 2010 his research was the only piece from the UK that was short-listed for the best prize and he was invited to give an educational talk at the next World Shoulder and Elbow Meeting (ISCES)  held in Japan in 2013.

He is one of the few (perhaps only) Consultant Orthopaedic Surgeon in the UK trained by 3 Presidents of National Orthopaedic Societies at Fellowship Level and has  a passion for teaching and training.  He regularly runs Sports Injury Symposia in London and  has been invited around the world to deliver lectures, and master classes teaching other surgeons, consultants and practitioners.